Food Grade Hydrogen Peroxide
and other types that are NOT food grade!

Why Would Hydrogen Peroxide Contain Stabilizers?

Hydrogen peroxide is very unstable (which is part of why it works so well). It decomposes into oxygen and water, and lots of things can cause it to decompose. (It's the released oxygen that does the work.) This is very convenient for disinfection and bleaching, but not so convenient for putting it in bottles that stay shelf-stable for long periods of time.

Stabilizers make it safer and more convenient to store hydrogen peroxide, and store it for longer. Without stabilizers, peroxide is more apt to break down. (Stored in a dark plastic bottle, with no contact with other material, the breakdown will be quite slow.) In some conditions, peroxide could break down so much over time that the package bursts. (If you buy 35% hydrogen peroxide, the container should be vented to allow small amounts of oxygen to be released.)  Peroxide with stabilizers can be stored for a longer time without losing any of its potency.

Without stabilizers, peroxide that is stored in a cool dark place will lose only a little bit of potency (its a very slow process), but stabilizers make it ...um... more stable. Which is convenient for a packaged product that will sit in warehouses or on drugstore shelves, possibly for years.

What are the Stabilizers Used in Hydrogen Peroxide?

The packaging for hydrogen peroxide does not have to tell you what stabilizers have been added. Sometimes it WILL say that it is stabilized though! Here’s a photo of a part of the label on a brown bottle of 3% hydrogen peroxide. Notice it says "(stabilized)".

Some types of peroxide may also contain other additives, in addition to stabilizers. This information is from here:  "Other additives may include nitrate (for pH adjustment and corrosion inhibition) and phosphoric acid (for pH adjustment). Certain end-uses -- which depend on the bleaching ability of H2O2 in alkali – utilize colloidal silicate to sequester metals and thereby minimize H2O2 decomposition." 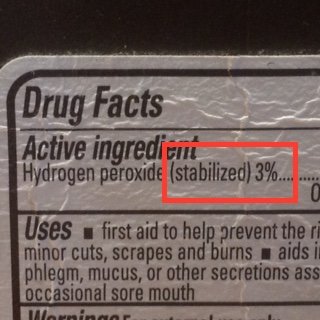 Why Do People AVOID Stabilizers?

Stabilizers are additives, and can be toxic, or unwanted. Generally for applications that involve contact with humans or other animals, there is a very strong preference for NOT having any additives.

Some people ingest (drink) VERY VERY diluted hydrogen peroxide. (Note this means VERY diluted – like a few drops of 35% peroxide in 8 ounces of water or more.)  Yep, this is a very controversial idea. And, as you might suspect, avoiding stabilizers is considered essential in this case.

Some people also put VERY VERY dilute HP into the water of chickens and pigs and other animals. (Again this is VERY dilute.) Avoiding stabilizers, here too, seems worthwhile and necessary.

What about for body care -- like for swishing in your mouth, for cleaning cuts, or for soaking your feet?  You’re not actually ingesting the peroxide or putting into something people eat... but you are putting the peroxide in your mouth or on your skin. So, many people prefer to use peroxide without stabilizers.  On the other hand, some people certainly do use drugstore peroxide (which has stabilizers) for mouthwash. I would prefer to use food grade hydrogen peroxide, because it has no stabilizers.

Are There Some Applications Where it Doesn't Matter if There are Stabilizers?

For things like carpet cleaning, and cleaning countertops, the stabilizers are probably less of an issue. Still, there's something to be said for using fewer chemicals. Because they do end up somewhere.

I guess it is a matter of opinion? If you don’t want to add any unneeded chemicals, you’ll always want food grade.

Still, there is less concern about stabilizers when you use hydrogen peroxide to whiten laundry then when you put it in your bath, or swish it in your mouth.

While we may not want extra chemicals, we are less picky about applications where the product doesn't go on our skin or into food. And having a stabilized product does have some advantages. (It won’t break down as easily or as quickly.)

What are Some Other Grades of Hydrogen Peroxide?

There are a number of different grades, including:

How About Using Food Grade Hydrogen Peroxide for Everything?

At some point, if you are buying food grade hydrogen peroxide for some applications, it may become just as easy to use food grade for everything. That is, even for laundry and housecleaning.

And if you buy it in quantity, it can be very inexpensive.  A cup of food grade hydrogen peroxide costs me roughly USD $1.  So, a gallon of 3% costs me, roughly, USD $1.25.  A bath will cost me a bit more, depending on how much hydrogen peroxide I use.

Does Food Grade Peroxide Require Shipping as a Hazardous Material?

Shipping requirements depend on the concentration.

Here’s what is true:

Our newsletter will keep you up to date on new pages added, plus some Adventures you can try at home:

No worries! Your email will be used ONLY to send you newsletters.

For some links, I receive ad commissions, at no cost to you. More info here.

Note: Products shown are sold by Amazon. This site does NOT sell hydrogen peroxide.

Gardening: attach sprayer to garden hose; use to dilute peroxide and spray on the garden