Sodium percarbonate is very neat stuff. It is a powder that releases hydrogen peroxide, and it is very concentrated.

Sodium PerBORATE is not as environmentally friendly

Sodium percarbonate is generally considered environmentally friendly. However, don’t get it confused with Sodium Perborate – which is made from borate, is NOT good to get on plants, and is considered somewhat harmful to the environment.


But, Sodium CARBONATE is okay

How to use sodium percarbonate

Sodium percarbonate is really easy to use for cleaning, stain removal, and laundry. Most products come with a chart that shows how much to use.

Sodium percarbonate is great for applications with HOT water – such as mixed into the soap solution in a carpet cleaning machine, or mixed with HOT water to mop the floor.

Sodium percarbonate is great for cleaning and disinfecting – for things like cleaning out the cat box, the birdbath, bedpans… Just mix sodium percarbonate in HOT water, fill your (empty) cat box or birdbath or bedpan, and give it time to soak. Just like hydrogen peroxide, sodium percarbonate needs to have time to do its work. The suggested amounts for this are usually small – so, one or two scoops (at 2 tablespoons per scoop) is probably enough to clean a whole cat box (filled with water), or a whole birdbath (filled with water). Use HOT water for this.

You can also mix sodium percarbonate into a thick paste to use on tile grout.

If you think of sodium percarbonate as an alternative form of hydrogen peroxide, that pretty much covers it. It can be used for most of what hydrogen peroxide is used for, bearing in mind it is a powder, and breaks down into peroxide plus soda ash.

All those OXYGEN products……

”Oxygen” products seem to be really “in”, and thank goodness! 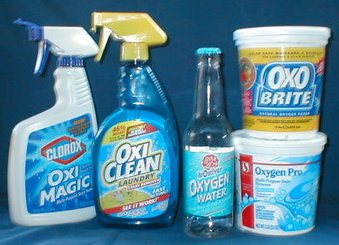 However, with that said, sodium percarbonate is generally very concentrated, so a few tablespoons of a cleaning product in a gallon of water is what’s recommended for most general cleaning applications.

If you are wondering where to get this amazing powder, well, you may already have some around the house. Check your laundry detergent.

After you click on any of the product links, be sure to read the customer comments about this product. Interesting stuff. (I’m going to try a suggestion I read.... letting laundry soak in sodium percarbonate solution for as long as possible, several hours or more before washing. This makes sense to me!)

OxiClean sells a wide variety of products for many uses.  If you look at these products (and others like them), you may notice they cover a lot of the very same uses as hydrogen peroxide! For instance, they have products for dishwashing, carpet cleaning, stain busting, laundry cleaning, and removing pet stains.... Does that sound familiar? All of these are uses for hydrogen peroxide, and sodium percarbonate! It all comes back to OXYGEN.

Sodium Percarbonate “Soak” Test -- DO Try This at Home!

I noticed that my oven pads were looking kinda dirty. I’ve had them forever. They are thick square woven pads (not the “glove” type). So, I mixed up some sodium percarbonate powder with very hot water. (I didn’t even measure how much, it was the very end of a tub of powder, and I tossed it all in.) I put the hot pads in, and left them to soak. (Notice here, I did not use any other soap – I just used sodium percarbonate powder – that’s it!)

I noticed a plastic cat brush that looked a little dirty, and tossed it in, as well.

Now, you never really know how dirty something is until you clean it, don’t you think? Actually, it was the color of the wash water that was the big thing. Oh my, gross indeed. Gross, but it also gives me the feeling I’m accomplishing something!

Everything came out nice and clean (after thorough rinsing, of course.) The cat brush looks great too.

Return from using sodium percarbonate to the home page for using hydrogen peroxide...

Our newsletter will keep you up to date on new pages added, plus some Adventures you can try at home:

No worries! Your email will be used ONLY to send you newsletters.

Note: Products shown are sold by Amazon. This site does NOT sell hydrogen peroxide.